The traditional process for ensuring that the highest producing cells are progressed during cell line development requires many different items of equipment to isolate single cells, screen for productivity and image for monoclonality resulting in a resource-intensive, time-consuming and expensive workflow.

We’ve taken all these common bioprocess challenges into account and developed a unique platform, Cyto-Mine®, that will help you find your highest producers from your large starting cell population and then selectively dispense only those cells of interest. The entire process is faster, circumvents the numerous steps required in traditional processes as they are all performed in one instrument and significantly lowers overall biologic manufacturing costs.

Our workflows are considerably more efficient as cellular screening is conducted early in the process, allowing the best-performing cells to be selected and taken forward for development. 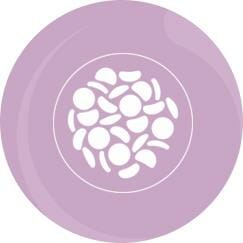 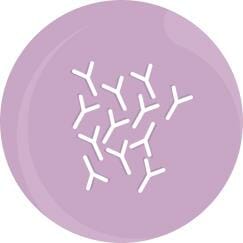 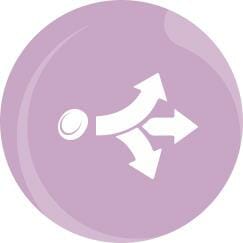 Sort based on fluorescence intensity to find the highest producers 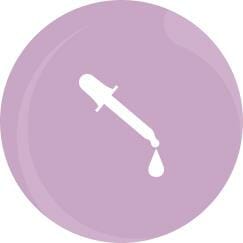 Cyto-Mine®, harnesses microfluidic-based picodroplet technology to encapsulate up to 200,000 single cells in one run, assay for productivity and image for monoclonality, as well as dispensing into 96- and 384-well microtiter plates. This provides a streamlined, cost-effective solution in comparison to using multiple resource-intensive items of equipment.

Learn More About Our Technology and its Benefits

Cyto-Mine® encapsulates single cells along with an appropriate animal-origin-free (AOF) Cyto-Cellect™ Probes into picodroplets and then incubates the picodroplets in situ to promote the secretion of proteins from the cells. The detection reagents bind to the secreted proteins and, upon laser excitation, a transfer of energy occurs between the bound detection probes, the fluorescent signal is then measured and the positive picodroplets are selectively sorted, imaged and dispensed. The assay reagents can be customized to detect specific, secreted proteins or biomarkers, or intracellular fluorescence such as a viability stain, or an intrinsic functional assay marker.

Contact us to find out more about our customizable assays 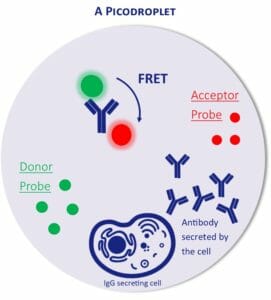 Sorting Chinese Hamster Ovary (CHO) cells for high concentration antibody expressors is commonly carried out by cell sorting. While cell sorting technology offers high throughput, it can sometimes cause damage to fragile cells. Alternatively, clone pickers can be used, but this method is very low throughput.

Cyto-Mine® perfectly balances the two – it is gentle on cells and can screen at a very high rate of 200,000 cells per day. One of the key features of Cyto-Mine® is the ability to encapsulate a single cell within a picodroplet. This provides a uniquely protective environment for each cell throughout the high-throughput automated process, promoting high levels of cell viability, from sample loading through to dispensing into microtiter plates. 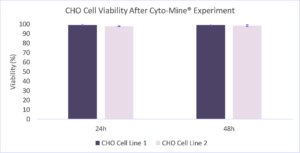 Two different CHO cell lines were assessed for their viability after encapsulating, sorting and dispensing with Cyto-Mine®. Greater than 97% viability was recorded 24 and 48 hours after dispensing (n=8 2x~1000 cells counted per experiment) data kindly provided by FUJIFILM Diosynth Biotechnologies, UK.

Maintaining high levels of antibody secretion is essential for effective antibody manufacture. To highlight how powerful our systems are for this application, we compared the performance of suspension CHO cells grown in picodroplets alongside those grown in a shake flask.

Initially, the CHO cells were washed and split into two equal proportions, after which they were encapsulated in picodroplets or added to growth media in a shake flask. The cells were then incubated, harvested at hourly intervals and then analysed for antibody production (by measuring IgG concentration). 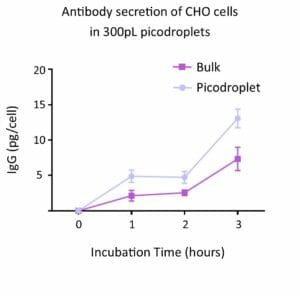 As can be seen in the graph, the results showed that the cells grown in picodroplets produced more monoclonal antibodies compared to those grown in the flask (likely due to better gas exchange in the picodroplet format). This was especially true of prolonged culture times, showing that our Cyto-Mine® system can significantly improve the production efficiency and yield when generating antibodies for use in biopharmaceuticals, scientific research or as diagnostic tools.

During Cell Line Development, one of the main challenges is that many of the highest producing clones selected during a batch screening, due to poor outgrowth, may not suitable for progression to fed-batch screening.

Using picodroplet technology to gently sort and selectively dispense only the highest producing clones promotes high viability of the selected clones. This supports outgrowth from these single cells and increases the chance of finding high producing cells with a good growth profile.

Three weeks after dispensing cell outgrowth from a single cell was followed and noted to be equivalent to Limiting Dilution Cloning, carried out in parallel. Data kindly provided by FUJIFILM Diosynth Biotechnologies, UK.

Cyto-Mine® provides multiple images of each picodroplet before dispensing. As the picodroplet travels through the microfluidic channels it rotates changing the position and optical view of the cell inside it. In the eventuality of two cells in a picodroplet clumping together, the image below reveals the importance of taking multiple images, these images provide indication of duplicates which are then flagged within the Cyto-Mine® Studio Data Analysis Software. The latter allows the user to identify unwanted picodroplets and allows the user to confidently exclude microtiter plate wells containing these from downstream processing.

Images for monoclonality assurance show the importance of multiple images and how this helps identify picodroplets containing more than one cell.

Application Note: Find out how to streamline cell line development by identifying high-producing clones with monoclonality assurance in one day 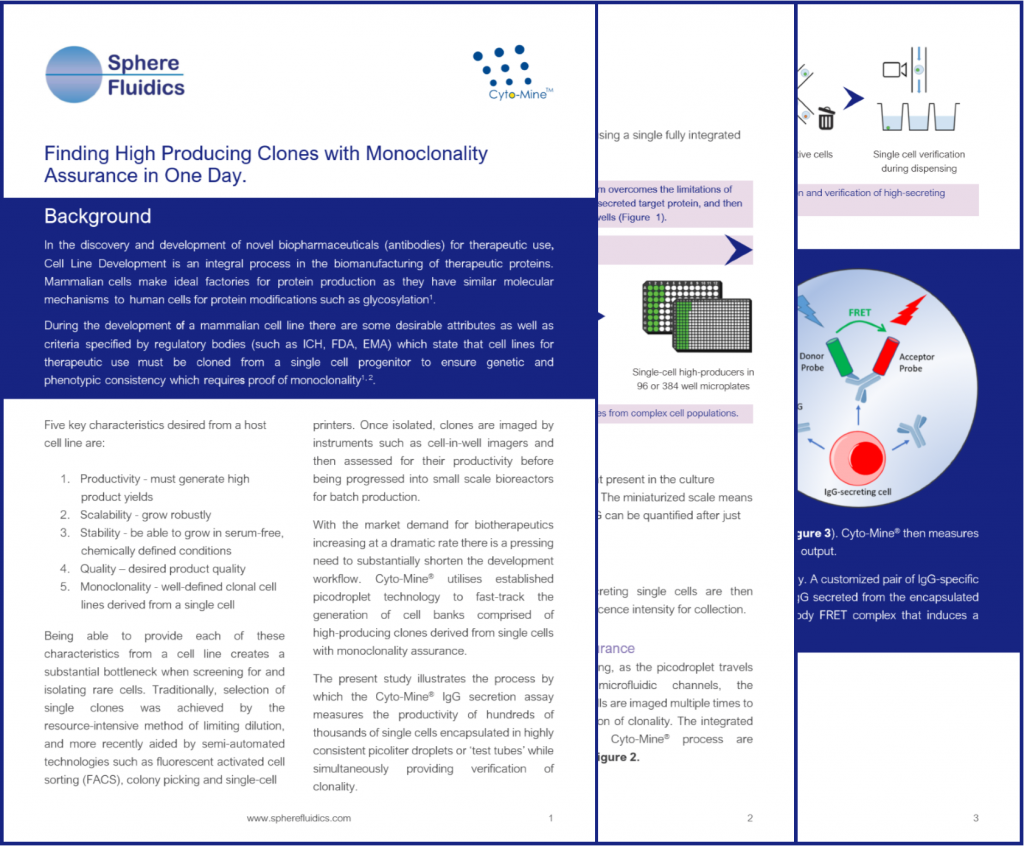 Other applications of Cyto-Mine® include: